Detailed plans are finally emerging of what will be built at the vast Morden Wharf site at Greenwich Peninsula which has lay vacant for around a decade now after a glucose company packed up and left in 2009.

Developer U+I purchased the site around seven years ago but any firm plans have been long in the making. 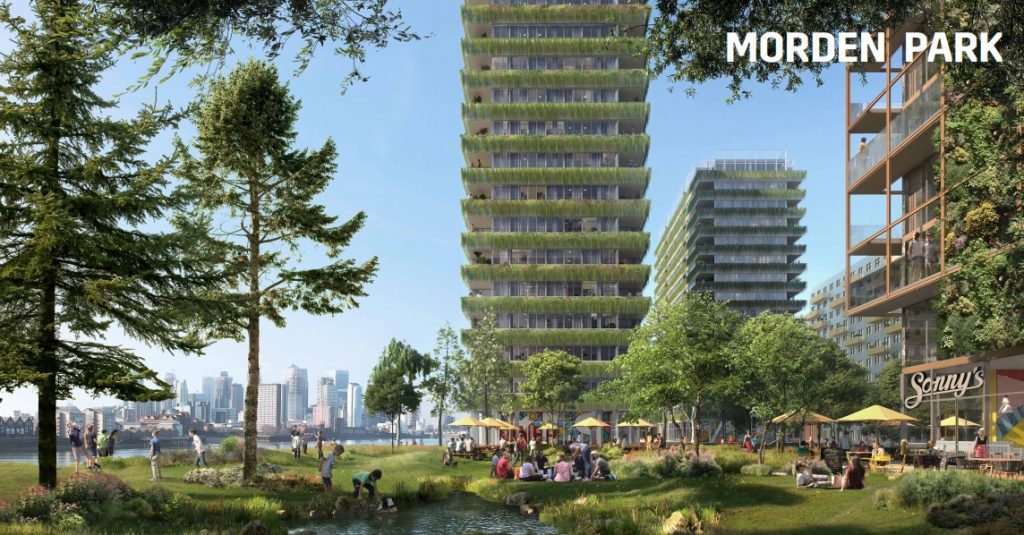 In the past year consultation events got underway and over the past weeks another was was held in Greenwich showing off revised plans and detailed designs.

This site will certainly make its mark in Greenwich with the tallest tower topping out at 37-floors under these new proposals. Unlike earlier plans there are some mixing of housing tenures now seen. Previously all “affordable” housing was located closest to industry and the Blackwall Tunnel approach.

It’s not a huge change with the majority of “affordable” homes still located away from the river with two blocks altered to mixed-tenure.

In total 1,500 homes are proposed with 35% affordable.  The base of one tower tapers in permitting more public space. Big fan of this feature and the use of burgundy here.

As part of the now-abandoned cruise liner plan, a 32-storey tower was approved just to the south of Morden Wharf.

In terms of transport there’s mention of a Thames Clipper stop either beside the site or at the adjacent Enderby Wharf. There’s now so many river pier plans there’s a real danger some passengers downstream at Woolwich will face very slow journeys without a shake-up of routes.

A new pier at Royal Wharf is opening imminently. It was supposed to be last week though trial running is now expected next week.

Proposals at Charlton Riverside for at least 7,500 homes include plans for a pier and a planning application has been submitted further north on the Peninsula near the new music venue Magazine and the Intercontinental Hotel.

The river is a great asset though how many piers are feasible remains to be seen.

The walk to the Jubilee line was supposed to have sweeping new bridge as part of Santiago Calatrava’s new transport interchange. That plan is scrapped and no confirmed alternative is in place.

There is talk of making Tunnel Avenue two-way in future.

A new street from Tunnel Avenue to the river named Seawitch Street is included in plans. It will run adjacent to industrial buildings which are to be retained and in use as a bus garage until around 2028.

Commercial space will be located along the street as well as on the riverside.

Plans for extra Jubilee Line trains were canceled in 2017.

What’s somewhat concerning is not improving this exact site but the wider area and links to the rest of the Peninsula. Many plans come and go and little is ever done to improve cycling and walking links hence ever more pressure on a stretched bus network.

Many routes are not just unappealing but dire. If a “climate emergency” is to mean anything then more people need to walk short distances. Simple as that.

Plans are due to be submitted soon for this site. Click here to view consultation documents.

When detailed plans are submitted I’ll cover them. Developments of this size will have hundreds of pages and that’s where the real detail becomes evident.