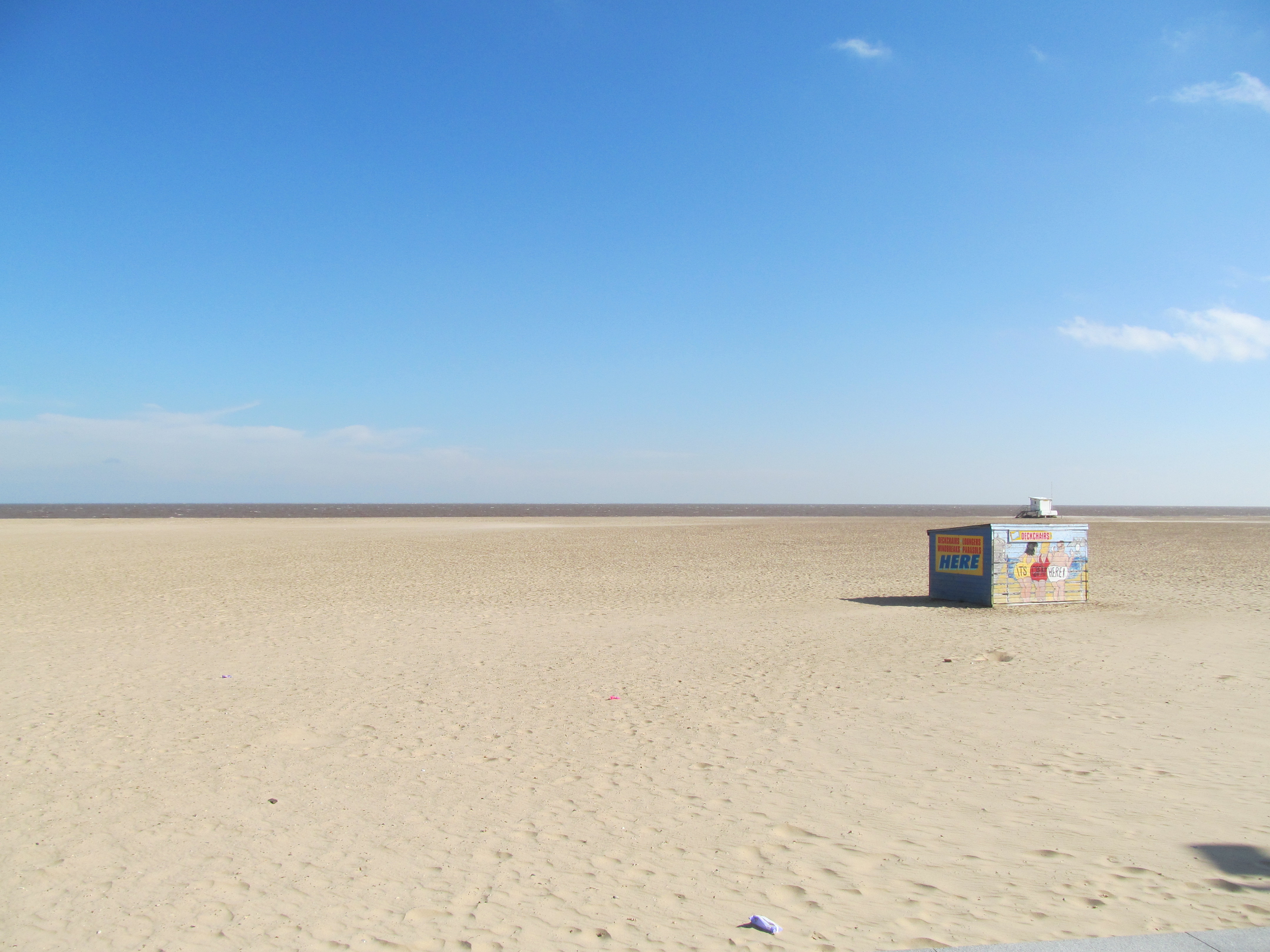 Fancy long sandy beaches and trips on a regular 50 year old train still in public service that isn’t running on a heritage railway? Well, Great Yarmouth may be up your street.

After a recent post about direct trains to the Kent coast gained a great deal of positive feedback I thought I’d do more listing places within easy reach of south east London by public transport.

Ok, so this trip isn’t direct but may be easier than some imagine. For one, as Stratford has grown as a transport hub it now offers fast (ish) trains to East Anglia as well as coaches. It also quick DLR links from much of SE London.

So why go? Well, for one beautiful sandy beaches abound.

It’s not usually this quiet of course:

Megabus now run direct coaches starting at Stratford so you can avoid Victoria. National Express run from Victoria and also stop at Stratford. Both regularly have fares from a fiver.

If you prefer a train and if you get down there in the next few weeks you can ride what is one of the oldest trains still running on the UK mainland that isn’t a heritage railway. It shuttles back and forth between Norwich and Great Yarmouth , but only for a few more weeks. And only one of two trains every other is this type.

A train from Stratford to Great Yarmouth will set you back £13 each way if booking around a week in advance (though weekends are a bit more). With a railcard a third is knocked off. At Norwich a change is needed to one of these beasts which are pushing 60 years old, which are leaving the route in about a month’s time:

The line is being upgraded as we speak (though not without issue) and the old semaphore signals will be replaced soon:

The track approaching the terminus isn’t the smoothest:

It’s very much a step into the past, as is a lot of Great Yarmouth.

There’s some wonderful buildings around the town, which is very much along the lines of your family resorts like Southend and Margate with amusements arcades and Bingo plus a rather stunted pier. 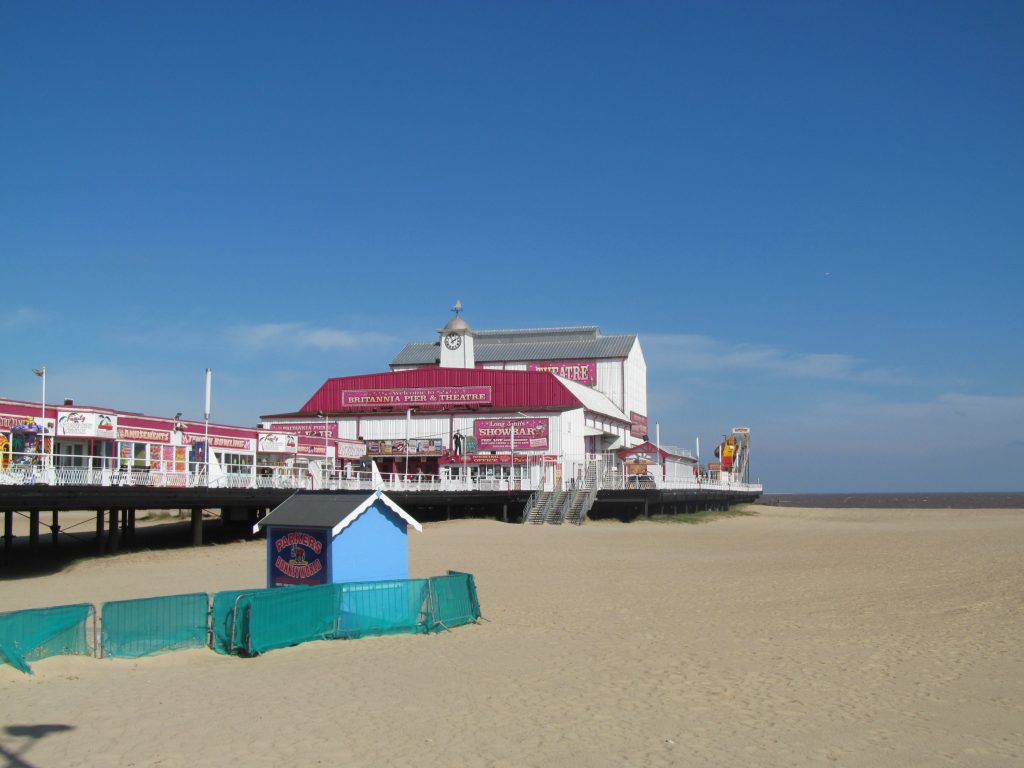 Beautiful buildings are seen on most streets:

A rich history is evident:

The signs of High Street decline are seen all over. Marks and Spencer recently upped and left. The features of this building revealed it to be almost certainly an old M&S even with signage gone. A Google Streetview search confirmed it:

Whilst the town has issues like many seaside resorts, improvements to the public realm have lifted it from the 1970s car dominated design malaise seen so often in coastal towns.

Severance is limited between the beach, pier and shops. There’s far less post-war clutter and obstacles making it more appealing all round. 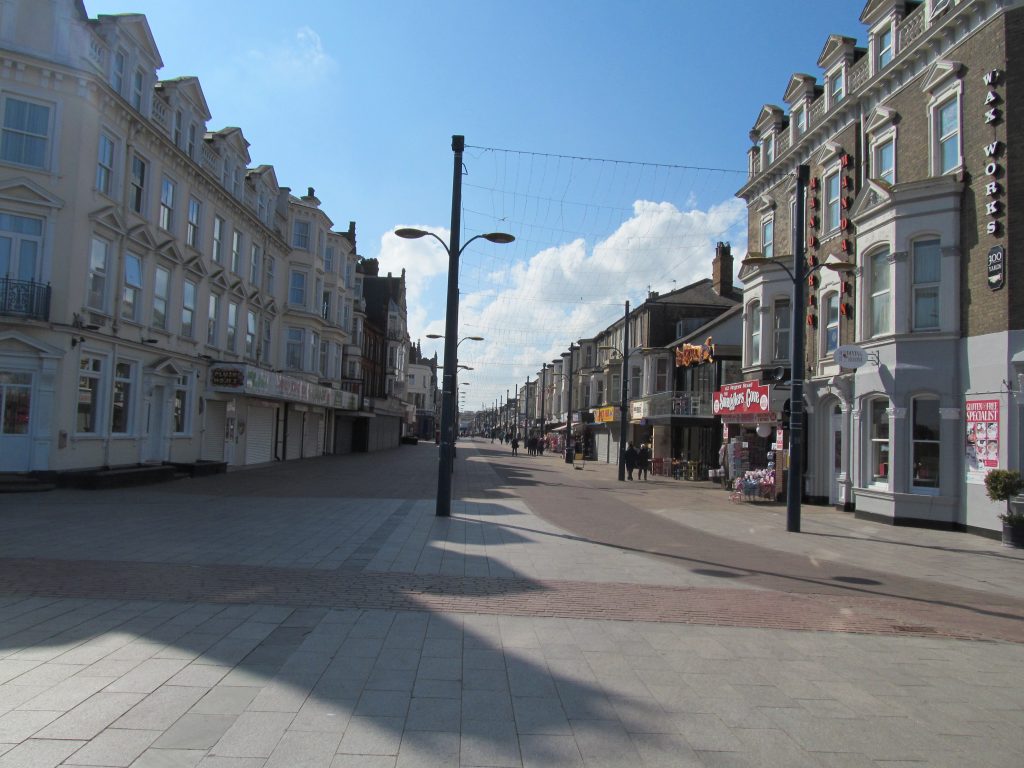 No need for many railings, bollards and assorted detritus here. Not one car was parked on paving – and this is outside of London where laws are much more lax on doing so.

It’s not all good though. The walk from the station to the town has been enhanced by converting part of a former bridge to pedestrian access in 2013 – but it’s still far from great:

This involves much underused brownfield land:

And of course all the public realm work in the world isn’t going to fix a moribund local economy – and many coastal resorts have faded as local employment away from tourism dried up. A strategy to rectify that, as highlighted this week, is sorely needed. The scale of homelessness is evident across the town.

Still, if you want to do your bit and ride a train like this before it’s gone, you could do worse than pay it a visit.

A train from Stratford to Norwich takes around 1hr 45 mins, then the local train takes about 20-30 minutes. Megabus does it in around two and a half hours direct from Stratford. Longer of course when it’s busy and the local roads are congested.

2 thoughts on “Easy trips to the coast: Great Yarmouth”