Just a short post with a brief update on a couple of pretty big stories for SE London. Firstly, the plans by Berkeley Homes to demolish ‘ Building 11′ (or the Officers’ house) have been withdrawn. The plans never really made much sense, as I outlined here.

The idea of demolishing the building for a taxi rank didn’t really hold up. Firstly, is one even needed there? If so, there is still enough space behind the existing building to accommodate it.

In addition, the building wouldn’t be a big barrier to pedestrian flow, and alterations could be made to improve that aspect if needed. Finally, most people leaving the station would not have headed in the direction the building stands. If heading east then walking along Plumstead Road, with it’s new shops and wide paving, would be the preference for most.

The plans have been withdrawn but Berkeley are looking to come back with new ideas. It’s important to ensure that future plans do the site and building justice.

Thanks to a comment from torontoaddick on a recent post, which alerted me to the proposal to convert the long disused Citibank tower at Lewisham into 230 flats. It has been a back up site for many years to their Canary Wharf office. See here for details http://planning.lewisham.gov.uk/online-applications and search using reference DC/15/90552 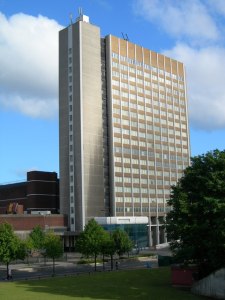 The developers hope to start on site in March and finish by April 2016. A document reveals a pair of nesting falcons are on the roof so work must be scheduled around that. Planning rules on office-to-housing conversions were recently relaxed, and in some areas of England a flood of applications have come in. This has happened less so in much of London, so far, but this site is only two minute walk to the DLR and railway station and a prime candidate for such a conversion.

With such a speedy conversion don’t expect exterior alterations. Without them full planning permission is not needed, nor other normal responsibilities like section 106 payments. The lack of external changes will no doubt irritate many who hope to see it demolished. It’s far from a looker, but I don’t mind the change. It will be partly obscured from some angles by the towers going up nearby, such as the 24 storey Lewisham Central now rising quickly. Add in a few more towers in coming years, which are needed, and it won’t be so stark on the skyline.

One concern is that it could hold up any redevelopment plans for Lewisham shopping centre. A complete rebuild of that site, with some towers featured, would be a big improvement for  Lewisham if done well. It’s an ideal site for high density to help with London’s housing crisis.

Being so close to the station will mean yet more pressure if it is completed by April 2016. It joins a long list of schemes completing within the next year to 18 months within a mile of the site. It wasn’t too long ago that the DLR completed its three car upgrade project. Will it need extra with many new homes at Lewisham, Greenwich, Isle of Dogs, Canning Town, Stratford and Woolwich all now being built? In fact, just about everywhere is seeing substantial housing plans including the Royal Docks. Thousands of new homes are now going up around Silvertown. And stations such as Cutty Sark already use selective door opening as the platforms are too short for three-car operations.

The train issues have been covered extensively. SE already lack stock with no additional trains currently planned until December 2017. Large schemes at Lewisham, along with nearby sites at Lee and Kidbrooke, will only increase the squeeze.

There was a debate on the issues this week in Parliament. The Sevenoaks Rail Travellers Association have covered it here. It’s well worth a read with some snippets like TfL being paid £25m to cover their increased services. It mentions extra stock available at the end of the year but this could be a mistake. Many are going to the north west as part of a flagship project, and like Southeastern, they really do need it. Some are also supposed to go to the Midlands, who again really do need them. I’m not sure any will be free and perhaps the rail minister was mistaken. All of these shortages show the lack of planning, dating back years, from the Department for Transport and the Treasury. Holding up Thameslink train orders for two years to negotiate PFI contracts are a case in point. That could’ve freed up trains to move to SE sooner than December 2017. Labour and the Tories are both to blame for years of bad planning.

The article mentions that Lewisham East MP Heidi Alexander spoke, as did Eltham MP Clive Efford. No mention of many other local MPs in London and Kent. With an election coming up it would be worth asking MPs what they did to put pressure on the DfT over the past few years, and asking them (and prospective candidates) what they intend to do regarding DfT and Treasury failings after May’s election. Many will happily bash Southeastern, and many already are, but have less to say about Whitehall departments who ultimately call the shots. That’s where real change and improvement will come from.