New Pub Blocked From Opening In Woolwich Due To 'Saturation' Policy

Posted by fromthemurkydepths on May 6, 2014 13 Comments

Greenwich council have recently turned down an application for a new town centre pub at Powis Street in Woolwich. This is mainly due to a ‘saturation’ alcohol policy in place. As anyone who has visited Woolwich will know, the place is hardly saturated with pubs, let alone decent ones. The application was made by people connected to Antic pub group, who run some high quality pubs across London, and went through a similar saga in 2012 to get another pub in central Woolwich approved. Click here for information about that from the 853 blog.

I presume the council have lumped all outlets that sell alcohol together in this policy. So it doesn’t matter if it’s a good quality pub offering high quality food and drink, it will come under the same banner as an off-license selling 2 litre bottles of cider for £2.

Another reason given for the rejection was potential noise. This was to people who may move into new flats above the fantastic converted former art-deco co-op department store, which Greenwich were happy to be demolished until the financial crises stopped the plan. The building was supposed to be beyond saving. Though apparently it is now fine.

Firstly it’s a main town centre street. It’s opposite a Travelodge hotel with a bar inside. Anyone moving in should expect some noise but we’re not talking 3am closures with live music here. You can’t stifle a whole area of a town centre for some possible new flats. Stifling growth in part of a town centre with great potential is crazy. Pubs & restaurants exist in town centres all over the country near to residential areas. Pubs exist all over the suburbs near to houses. Go to town centres in just about any city in the UK and Europe and there are streets with high density housing above shops, bars, pubs etc on the ground floor.

There also needs to be some distinction between applicants in a saturation policy, with high quality outlets encouraged. Woolwich is the biggest town centre in Greenwich borough. In 2011 the borough had a population of 254,557. Woolwich has good links with most of the borough and should be attracting far more people in the evenings.

Applications for many new flats have recently been submitted in Woolwich, with a few tall buildings already under construction. The borough population is forecast to grow 24.4 per cent from 2011 to 2021 with heavy growth within Woolwich itself. The DLR and future Crossrail link increases the catchment area to north of the river. It should be a buzzing, lively evening destination. Yet the council seems reluctant for any decent nightlife to appear to cater for the existing population, let alone future growth. What’s there now? A very average, overpriced Young’s pub in the Arsenal development, a wetherspoons on the main square and a few dull pubs. No live music. No cinema. It’s not much of a destination is it?

Powis Street and Hare Street highlight some of the problems with Greenwich Council’s management of neglected parts of the borough and Woolwich, particularly the forgotten areas near the Waterfront. A lack of ambition and learning from elsewhere. Encouraging new pubs is an essential part of increasing the appeal of the town which they should be actively pursuing. Along with these other ideas on how to improve the area of Powis Street and Hare Street – 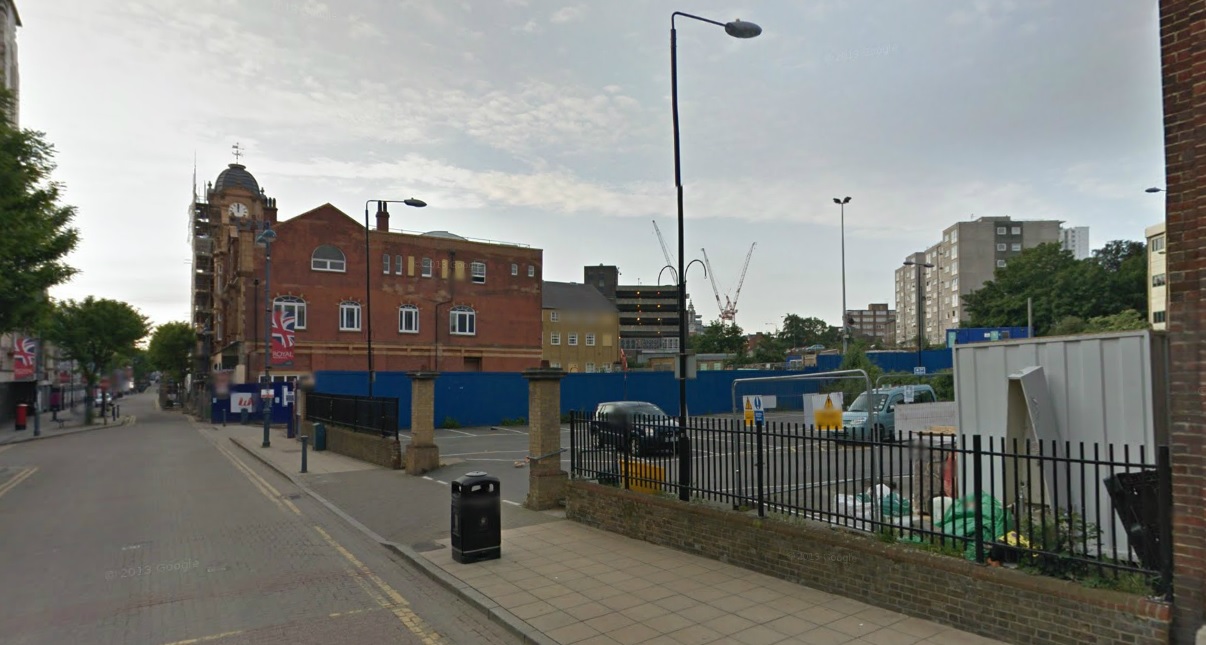 Behind the car park is the Travelodge hotel. A separate application for a pub on the corner there was also recently blocked. This was due to ‘unacceptable alterations to a grade 2 listed building’ which seems fair enough. However the application drawings looked fine, and Travelodge have made a hash of restoring their part of the building, particularly the part facing the car park. The ground floor street frontage is also very plain and wasn’t restored.

There’s so many ideas of what can be done with that area. The area has been dead for a long time. Boarded up shops and crumbling facades have lingered for decades yet it’s an area with some fantastic buildings. Recent improvements like the Travelodge hotel are generally a good start. You’ve now got tourists and footfall. A high quality pub and restaurant would be ideal hence the interest Antic have shown. Many people actually stay at Travelodge in Woolwich when visiting London to save money and then travel to central London to see the sites. Those tourists will be coming to London to spend money, drink in nice pubs and eat good food. Then they get to Woolwich and what do they have to enjoy? It hardly lives up to the impression many will have of a major world city with quality food and drink options. Instead of eating opposite the hotel they’ll have breakfast/lunch/dinner in central London or Greenwich. Then there’s the half-built other hotel (what’s going on there?) nearby bringing more visitors in future.

Aside from visitors left cold by poor options, there are locals who have a very uninspired choice around the borough. When I visit friends around zone 4-6 in SE London there are always complaints about just how few good places there are to go in the evening. Greenwich is about the nearest place if you live somewhere like Plumstead and you want any variety in your nightlife. Half an hour away or more. Woolwich has the Dial Arch which coasts along knowing there is little competition. Add in the thousands moving into new developments and new places are needed. The other Antic pub in General Gordon square will add a bit more choice but there will still be very limited offerings. The town centre Antic pub could have lots of live music, and the other could be quieter with a greater emphasis on food and drink.

Big strategic thinking is needed for that area of town with all the new developments. Alongside that small scale policies would foster growth and more of a buzz. In 5 years time, with Crossrail and thousands more flats around there, it isn’t too much of a stretch to imagine a high street with the attractive buildings renovated and with varied places to shop, eat and drink. This has happened all over London and other UK cities. South East London, particularly past zone 2, is lagging way behind. The demand is there and only going to grow. Woolwich and the local council need to seize the opportunity.

EDIT : Shortly after posting this Emma from Hop Stuff brewery followed me on twitter and I had a little look around their website having heard good things about them. Hop Stuff are a small upstart brewery based on the Royal Arsenal and I’ve been meaning to try out their beer for a while. Looking at the site it seems they are stocked quite widely with a few places to try them in Woowlich including the Prince Albert, which I confess I’ve not been to. I think the pub has come up a few times on twitter recently, with (I think) a beer festival on a while back, so the situation in Woolwich with choice isn’t perhaps as bad as stated above. However there is still a need for more options.

With a local success story like Hop Stuff, access to low cost units to rent at that end of Woolwich would clearly benefit businesses like that as well as the town itself. It could give the brewery a place to sell their own beer. Perhaps initially as a shop for off site sales, and/or a small pub?