Berkeley Homes have recently consulted on revised plans for five towers by the Thames located on the car park of Waterfront leisure centre.

The plans have changed. Initial plans in 2013 were for 764 homes in three blocks which has now morphed into five.

The leisure centre is due to move to Wilkinson’s site on General Gordon Square close to the DLR and Southeastern station.

In some ways the revision is welcome. The three blocks appeared as giant slabs when viewed from certain angles. Five towers breaks up some large massing.

The issue now is that we have five towers which are all pretty similar possibly creating a large “wall” effect. The flat roofs on all five exacerbate this.

There’s minimal difference in height in all five towers under the new plans – a small range from 18 to 22-storeys. All three riverside towers are exactly the same at 22-storeys.

A riverside wall effect is not desirable. The best skylines have drama and variation. If what people in Woolwich town centre see when looking to the Thames is a wall, and all people from the river see is a wall when looking towards Woolwich, then you get none of that.

Six towers in close proximity that are all within 5-10 metres in height is not desirable. Variation is.

It would be better if at least one tower was a figurehead of say 25 to 30-storeys – or even more – to break up the monotony.

Another 10-storeys of penthouses could also allow more income for social housing. It’s not ideal, but in the constrictive world of development that exists at this moment, council power is very limited. Taller could also mean more slender, as these have some heft and are dangerously close to slabs looking at models:

I know many recoil when it comes to heights but tall and elegant beats short and stumpy which is often imposed due to needless height decreases. This site doesn’t overlook housing. Be bold and go for something with panache that soars.

Altering roof lines of some of the towers would help. Currently its five boxes with nothing interesting at the peak. Flat roofs. Have a taper on one of two to improve visual interest.

One very appealing feature of the plans is the corner treatment. It reminds me a bit of a neglected building on Powis Street, as well as the refurbished co-op building beside:

There also appears to be less poorly located balconies attached which are increasingly becoming a bit of a mess on many new-builds – obscuring form and lines and too often randomly placed. Balconies here continue the stepped effect on the facade.

The facade appears to be metallic, which further pushes the art deco feel. I do hope this is not altered for a drab shade of grey further down the line.

The increase in permeability from the revised plans is also welcome.

One big apparent flaw in the revised design is a big shortage of commercial space at the base of the towers in areas facing the river. The renders appear to show one space, and the rest as blank walls.

It’s likely that this is due to car parking being placed there. A crazy set of priorities if true and I would hope that Greenwich Council planners would pick them up on that.

This top down image is worse. It only shows commercial in units facing Woolwich High Street looking at beautiful Riverside House. Who would rather do that than face the river?

The council fund a CABE review panel (which is very welcome) to analyse large developments and I’d expect them to raise questions and ask for revisions if that’s what has happened.

This is a great riverside spot and many thousands of people are moving into the vicinity and they’d love to have a meal or drink by the river.

As would many others in the area who would be attracted to Woolwich if such a setting existed. One commercial space isn’t enough. The most attractive areas in cities have a wide choice in close proximity.

If its for car parking then it could be that too many spaces are planned. In such a spot close to Crossrail, DLR and Southeastern plus river boat services with Thames Clippers, then only the disabled would need a permanent car. Car club rentals should suffice for others. 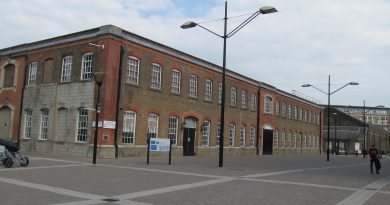 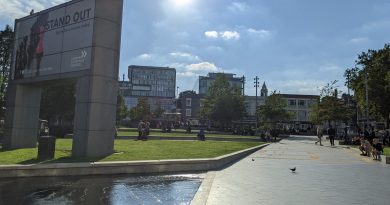