As more details become available, it appears that the southeastern Greenwich rail line will see large service and capacity cuts from January. From 5:30pm to 6:30pm, three out of the existing nine trains from central London will be cut – 30 carriages in total. Overall, when looking at the evening peak period of 4-7pm, there will be six less trains calling at London Bridge – a total of 50 carriages in all.

In addition to the three that are axed, there are three that will still start from Charing Cross but are unable to stop at London Bridge. The ability to maintain capacity by lengthening other services at the busiest peak period seems remote. These changes are inevitable with Thameslink and London Bridge rebuilding work, but the question must be asked of why mitigating measures have seemingly not been taken before now. 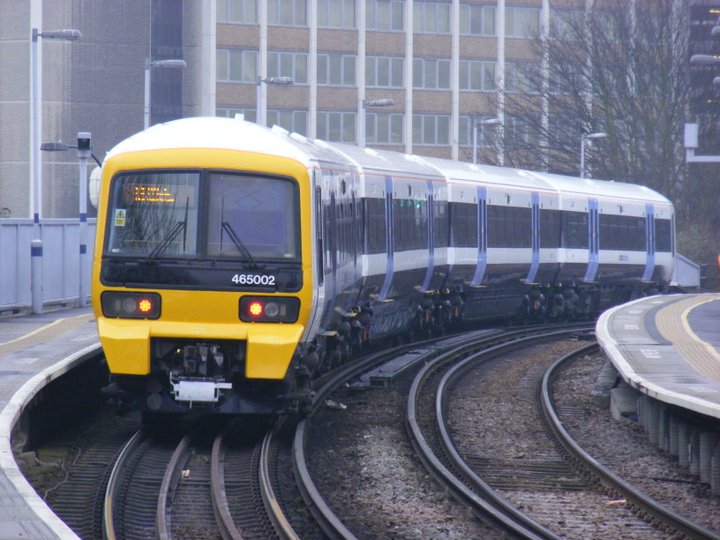 If the remaining six trains from 5:30pm to 6:30pm are all lengthened to the maximum 10 carriages, that will be a boost of 12 carriages on the existing amount for those services. But factor in the 30 carriages removed by axing three 10 car trains, and that’s a net loss of 18 carriages.

Another option is to run the more modern, higher capacity trains on all those six services right? Well, if older ‘networker’ trains with lower capacity (due to more seating) are substituted on the remaining six trains it is still very unlikely that is going to make up for 18 less carriages. But even then, the possibility of switching the remaining services to higher capacity trains is unlikely, as two of the six will head to Gravesend where the newer, higher capacity class 376 trains cannot run as they lack toilets. Currently only short distance routes to Dartford can operate without toilets on board.

So make the Gravesend trains 12 car trains with older stock instead? Can’t be done. They are currently ‘semi-fast’ services and skip a number of stations. But from January they will stop at all stations within the M25. Whilst this does mean those at Deptford, Maze Hill, Plumstead, Erith etc gain, it also results in stopping at Woolwich Dockyard. The station is in a deep cutting and whilst every other station has been lengthened to take 12 car trains at a cost of millions, the cost of extending into the tunnels has been deemed prohibitive. Due to this 12 car trains cannot run on these services and so that opportunity to increase capacity is gone.

What could’ve been done?

One option would have been to fit ‘selective door operation’ so only 10 out of 12 carriages would have doors open at Woolwich Dockyard. This is common on many trains across the country as well as on the DLR. This has not been done. Southeastern cannot take all the blame here. Network Rail, the Department for Transport and the company who own the trains (the franchise operator merely leases them) should have been looking at this. Something will have to happen with Woolwich Dockyard station long term as the entire network has had much money spent to operate longer trains, and one station is holding it back. It was speculated that the main reason the station was closed during the Olympics was because 12 car trains were supposed to be running in 2012 and couldn’t stop there.

The other issue is that the newer class 376 trains southeastern use can only be a maximum of 5 cars and coupled together make 10 car trains. They were designed and ordered around 10 years ago to run services as 10 cars with less seats and more standing as a cheaper alternative to 12 cars with more seating and less standing. The same capacity but less carriages and comfort. That short term decision for shorter trains has now been superseded with the millions spent on platform lengthening and power upgrades, except at Woolwich Dockyard, but this would not be a problem with SDO which they would have had if ordered to operate as 12 cars. However, now it seems the trains cannot be extended to run as 12 car as the design is 10 years old, so adding extra cars is not possible. When looking at these lines it appears that short-termism and mismanagement have been a mainstay for some time.

Another option would be to receive new 12 carriages trains which would be able to stop at Woolwich Dockyard, with the existing 10 car trains moving elsewhere to areas which have no possibility at all of 12 car running. Southern suburban routes fit the bill. Most other London area franchises are receiving brand new trains right now – Southern, Thameslink, South West Trains and soon First Great Western and East Midlands Trains. Some of these orders have options available for further add-ons. Take up the options, bring the new build trains able to run as 12 cars with SDO to southeastern and the 10 car could move to Southern.

Maintaining capacity across the peak?

So it now looks as if there could well be a major crunch coming. Southeastern have said they will maintain capacity across the whole peak period, which is 4 – 7pm. This may be true but if it’s because they extend train lengths from 4 – 5pm (many are only 4 or 5 cars at this time) then that will not make up for severe cuts from 5:30 – 6:30pm, when most people are getting out of work and arriving at stations.

All this also raises the question of how will they be able to cope with disruption if less capacity? As I write this a major junction at Lewisham is unusable after the track split over two weeks ago. It is not due to be finished for another two weeks. Lots of services have been altered due to this, though not on the Greenwich line. In addition there is emergency work on the line to Hayes today. This leads to problems as trains are out of position across the entire network. The trains are timetabled to be used most efficiently, so for example one travels from Dartford to central London, then heads out from central London to Hayes, then back to central and then onto, say, Orpington. This means a problem in one area affects the entire network.

Now surely computer modelling has been carried out you may think. But last month on the other side of London Bridge, Southern services had to be quickly changed after a new timetable was adopted and things did not work out as planned. Those changes were for far less time, and on fewer services, than the southeastern side beginning in January.

And one last thing to add to quite a gloomy post. Development along the line continues apace so is the modelling taking that sufficiently into account ? Big developments are going up right now, or imminently, near pretty much every station – Dartford, Slade Green, Erith, Belvedere, Abbey Wood, Woolwich Arsenal, Woolwich Dockyard, Charlton, Westcombe Park, Maze Hill, Greenwich and Deptford, further adding to the squeeze. I think Plumstead is the only station that isn’t seeing any nearby. Tying in with this, and why long term action should’ve been taken to compliment short term measures, Greenwich borough is forecast to have the biggest population increase of any borough in London up to 2031 and the largest drop in local employment, meaning commuting will increase sharply.

The DLR may take a decent amount of additional capacity (though already quite full & the developments at Lewisham & Woolwich will only increase that) but just how much more can be accommodated there by say, 2016? It may be wise for commuters on the Greenwich line to be warned so they can plan changes and look at using the DLR more where possible. Long term changes may be needed. People could change their behaviour during the Olympics which was two weeks at the quietest time of the year. Three years is a whole different story. With this change occurring and know for years it would have made sense to sort out Woolwich Dockyard and adapt trains to cope the next few years.

The rebuilding plans at London Bridge are necessary and should be great when complete. The lack of forward planning is where criticism may have to be directed. on the bright side by 2018 Crossrail will be open and London bridge fully rebuilt. The next 3 years will be difficult and I’m not convinced sufficient action has been taken. On a related note, the next post will look at the many new developments around Greenwich now under construction.

3 thoughts on “More details on Greenwich Line train cuts, and it looks bad”