Posted by fromthemurkydepths on September 17, 2020 18 Comments

In recent weeks traffic levels have shot up across London and much of the UK with many entirely blaming changes to streets designed to encourage a switch to walking and cycling being blamed.

How credible is this argument? Well, looking at the numbers shows congestion will continue to rise sharply regardless of measures taken. 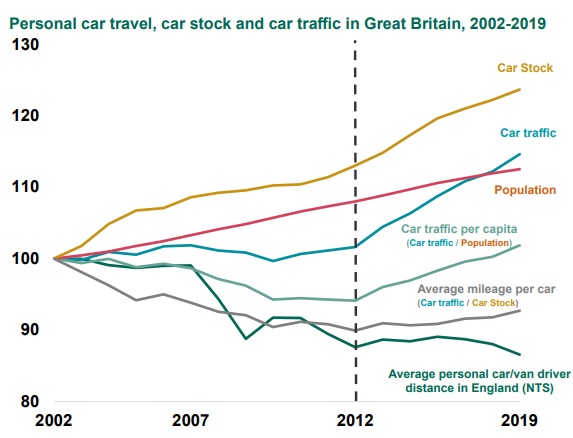 Over the past week, the Department for Transport revealed in a report that car and taxi traffic in Great Britain increased by 2.2 per cent to 278.2 billion vehicle miles in 2019 compared to 2018. Traffic city backstreets is up 15 per cent from five years ago. They also note that “between 2012 and 2019, growth in car traffic outstripped population growth, indicating an increase in average car driver distance (car traffic per capita grew by 8.1% in this time period).”

Average journey lengths are going down. An extra 300,000 cars were registered for use last year alone.

That was pre-pandemic. Once it hit, public transport capacity was reduced hugely. Government are encouraging people not to use it – but how in a city like London do people get around?

In such an environment, it’s either do nothing and watch traffic spike further and further or take measures to shift behaviour of those who choose to drive. Note, that isn’t everybody but those who do have a choice. It does mean short term disruption but long term positive impacts on congestion as behavioural change is undertaken which in turn frees up road space for public transport, the disabled, business deliveries to give three examples.

And the thing is, there’s examples the world over of this working though it often wasn’t easy to get the ball rolling. It’s making cycling the option for young and old, rich and poor and your average bloke rather than those in lycra. Go to any number of countries and look at the variety of people on bikes then come back to London. It couldn’t be more different. Hostilities between cyclists, drivers and pedestrians is on another level here. What are we doing so wrong?

Unfortunately measures have been handled extremely poorly. Communication of what will happen without action is badly handled and it took a huge amount of time to enact change compared to many other nations, and doing so when traffic is already back to high levels both puts off those who tried cycling during lockdown and frustrates many bus passengers and drivers now stuck in traffic.

One thing that will prove disastrous is many taking to cars and that’s exactly what we are now seeing with traffic at 105 per cent of levels last year. Traffic is also now worse in areas where no changes to streets have been made alongside spots where Low Traffic Neighbourhoods and street changes are implemented.

If traffic is up while work is undertaken to make cycling viable to more people, it’ll be little compared to what happens if people feel they have to drive. Remember, many are still working from home or on furlough. Some parents are still keeping kids at home.

So while each scheme needs studying and some appear wasteful and of little use, others will in time assist with changes needed to prevent increasing gridlock over a longer time period. For those saying reopen all backstreets and block improved walking and cycling links, how do you propose reducing car use and ensuing congestion? We know car use is up sharply. If it isn’t reduced, all those same arguments employed against LTNs such as emergency services being held up will apply ever more across just about every corner of London – and beyond.