Posted by fromthemurkydepths on February 29, 2020 27 Comments 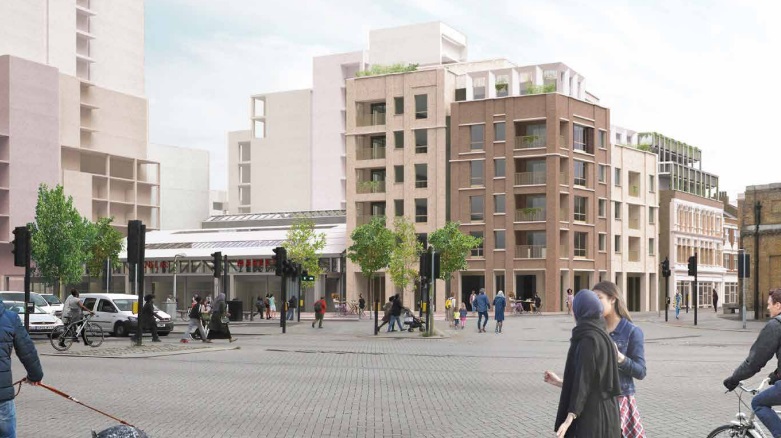 Revised plans for up to 800 homes, shops, cinema and a refurbished covered market have been revealed for the Spray Street area in Woolwich.

Earlier plans would have seen the market removed – though it’s now listed. Revised designs now integrate the market with a Picturehouse cinema.

Housing numbers have increased from 742 to “750-800” despite now retaining the market. The earlier application from January 2018 was covered on this site here.

Like those plans buildings are centred around a plaza in the centre of the site. Once again towers face onto Plumstead Road without any setback in places. 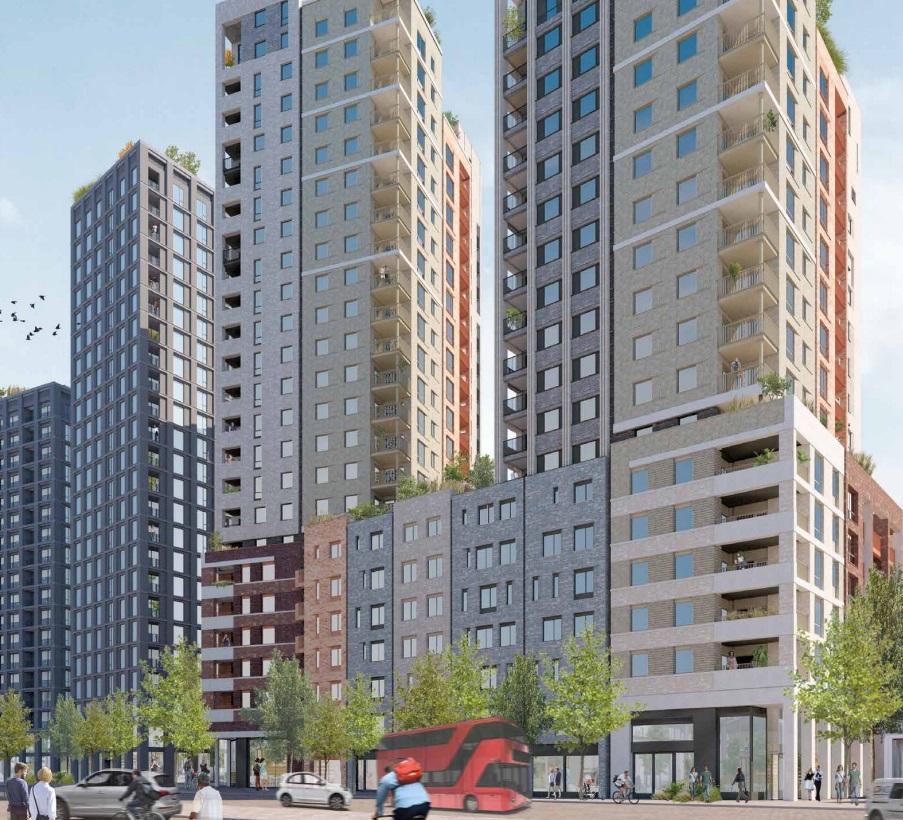 I have little objection to height here given the excellent public transport links and prime town centre location, but this massing could lead to a canyon effect. Not a pleasant place considering commercial space and major bus stops at street level. 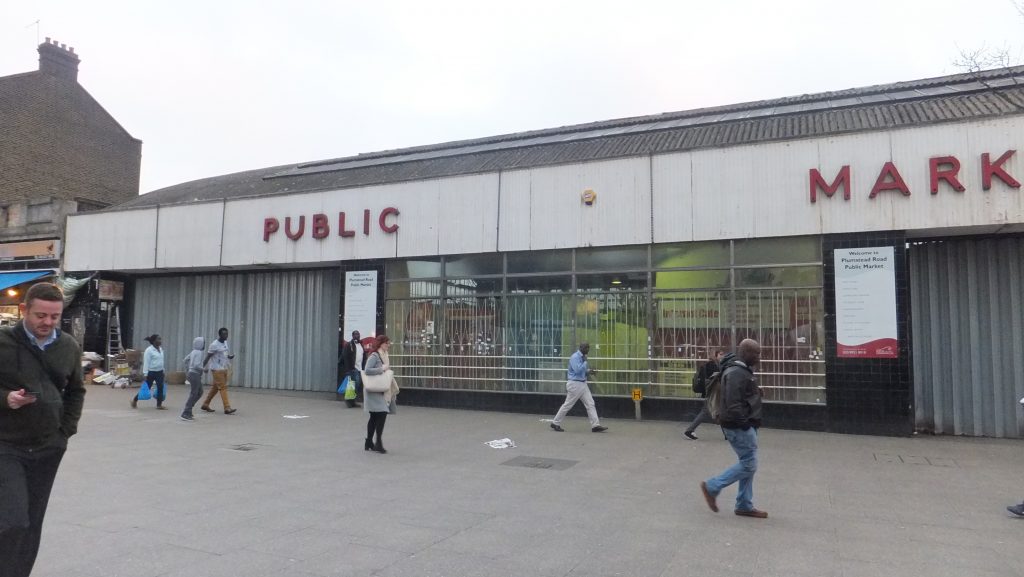 Renders appear to show substantially narrowed paving. It’s currently a good width and much needed given high numbers of pedestrians – which will only increase. All too often in London (and the UK) pedestrians are forced into narrow spaces.

Let’s not eat away at one place where pedestrians aren’t crammed in – and which offers scope for a dedicated cycle lane and parking in future. 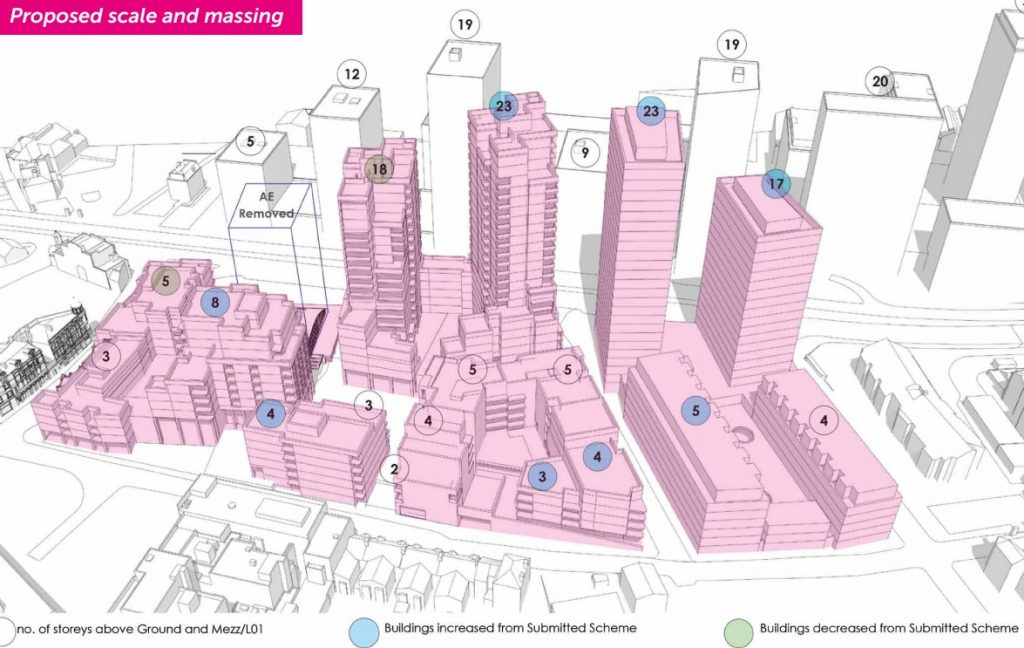 Buildings then taper down from towers to three-four storeys near a long-vacant site owned by TfL.

Surely when this is finally developed it will be at mid to high density. Adding more floors to buildings here could allow setback to towers on other parts of the site which could vastly increase the streetscape for huge numbers of people using Plumstead Road.

In a welcome move it looks like some buildings on Woolwich New Road are to be retained and refurbished. OK, this is facadism/deathmasking but done pretty well. This is something I’ve long hoped for and was absent from 2018 plans. Retaining the best of what’s there offers a welcome contrast and variety across the development. 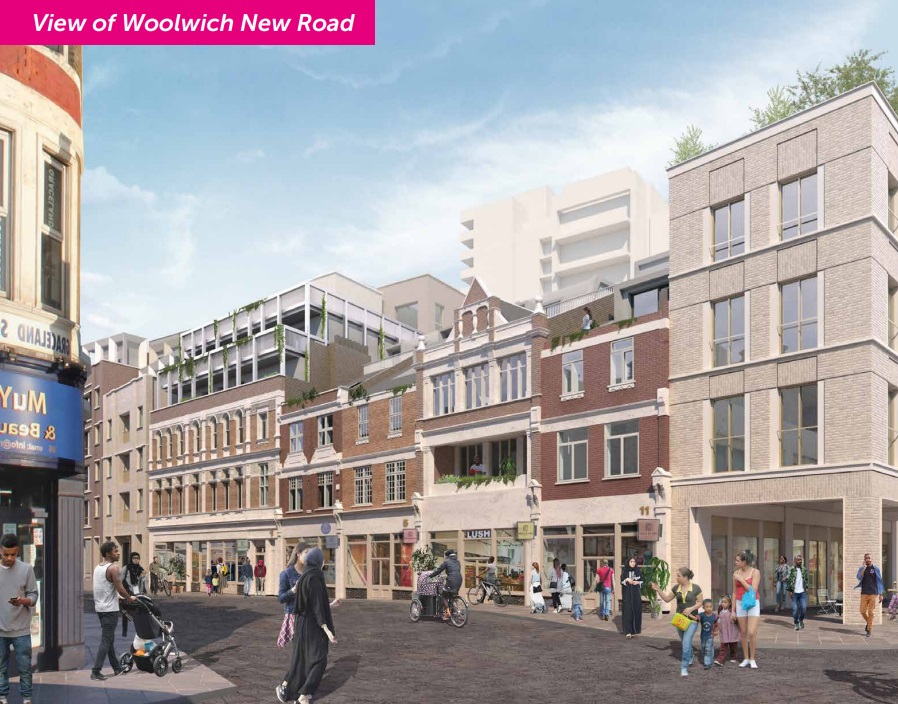 Much better than what was proposed:

Previous plans drew criticism for removing existing businesses without offering similar replacement locations. For example, a newsagent with much passing footfall was offered a place in Abbey Wood. We’ll have to see how that plays out.

Overall there’s lots to like about this revised scheme which could offer Woolwich a real shot in the arm. If the towers could be made slightly more elegant facing onto Plumstead Road with set backs from the street edge and massing varied across the entire site it’d be a winner.

There’s plenty of time for changes. Building work is not expected to start for three years.