Posted by fromthemurkydepths on April 26, 2018 4 Comments

This is the third part of an ongoing look at party manifestos before the upcoming Greenwich council elections on 3rd May.

The first two parts looked at Labour, which can be seen here and here.

Now then, if those two articles weren’t enough to put you off the site, we have the Tories effort.

You could say that it’s a lot easier to come up with promises and specific ideas if there’s almost no chance of winning, as is the case with the Tories in Greenwich.


Surprisingly though they don’t really do this. The opening forward from leader Matt Hartley actually appears to be a plea not to be wiped out, stating the need for an opposition to Labour.

This approach is derived from the strong vote for Labour in last years General Election and opinion polls in London. Labour have almost complete control in nearby boroughs such as Lewisham and Newham and the Tories fear the same will happen in Greenwich.

In many parts of the borough the Tories appear to have given up on any chance of contesting away from their heartlands around Eltham. Candidates in areas to the north are noticeable by their absence on social media.

They did not show at Plumstead hustings earlier this week. Then, again, Labour also failed to show at a following event meaning it was cancelled. Only the local residents Plumstead Party was willing to attend both.

In places like Greenwich Peninsula, with demographics that’d be expected to benefit the Tories, it’s actually the Greens who have taken to Facebook and Twitter with gusto highlighting issues with the environment.

Pretty early on in the Conservative Manifesto it follows the expected script and blames London Mayor Sadiq Khan for cuts instead of central government.

First up are police stations. They highlight the closure of Eltham.


However the vast majority of cuts to police forces UK-wide, including London, came from the Home Office, led by Teresa May from 2010 to 2015, and has mostly continued since.

Some modest hiring of officers have recently been announced, not just in London but places like Kent, but nowhere near enough to make up for previously lost numbers and much of that is funded by a precept added to council tax.

This is probably the worst way of funding policing, or other services given the extremely regressive nature of the tax. Unlike income tax, with a noticeable sliding scale based on income, council tax is pretty “flat” across bands. Someone in a £5 million mansion pays little more than a couple on minimum wage renting in a buy-to-let dump.

It’s clear why this has been done. Central Government pushes through cuts, then says to local authorities (in London’s case the Mayor) they must fund new officers yet restricts ways to do so. Guess who gets much of the blame?

This isn’t just happening in London.

So the regressive council tax precept must be used as compared to pretty much all other developed cities in the world, Westminster greatly restricts the Mayor of London’s ability to raise funds in other ways.

This goes all the way back to Blair who created the Mayor post after the 1997 election given he’d made many prior promises and pledges (though he didn’t want to) and so hampered powers from the outset. No other party has done much to change that. They want to keep power in Whitehall and not City Hall.

The ability to levy higher taxes on overseas property buyers, for example, or a tourist tax which is extremely common all over the world, is greatly restricted or blocked.

The UK is the most centralised country in the G7 with only 5 per cent of revenue locally raised due to central government blocking many local powers.

It’s 50 % in Canada and 13 % in France which is the next most centralised country.

London has more powers than most of England but compared to most world cities it’s minimal. Bear that in mind with squabbles over blame and issues of funding.

Back to the manifesto and next up comes claims of pushing for better High Streets. The claims are modest but do appear to be true -at least in the south of the borough.

Greenwich borough Tory Cllrs seem to care more about improving areas in the heart of towns than the majority of Labour Cllrs, with the result that the ruling Labour party have overseen many town centre declines whilst doing little about it.

I don’t need to go on again about the poor state of many estates, streets and areas of public realm across the borough. Yet Labour seem unable or unwilling to shake up departments responsible for it.

The Conservatives highlight their opposition to the former weekly propaganda sheet Greenwich Time. By the time it closed only two out of 300+ authorities ran weekly newspapers, yet Greenwich Council claimed it saved money. Surely more than a tiny minority of authorities would do so if that was the case.

It definitely wasn’t to put Labour politicians in a good light in a publicly funded newspaper. No, no, no. Don’t go thinking that.

The replacement is Greenwich (B)info, which is slightly smaller and now every two weeks. It still costs hefty amounts to produce. The Tories want to axe it and place statutory notices in other papers.

Coincidentally Greenwich’s newspaper turned up this week for the first time in months. It’s advertising Greenwich Local Labour and Business, which does some good work yet gains huge chunks of public Section 106 money and often replicates the private sectors by advertising jobs in coffee shops and the like. 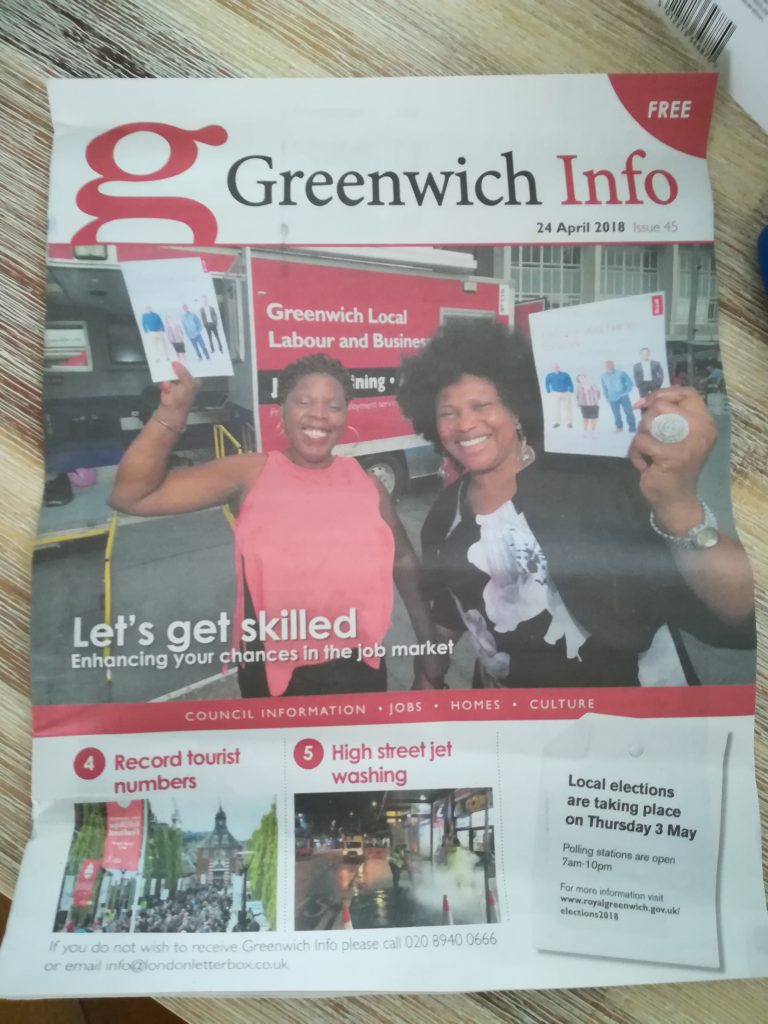 It also highlights the council’s jet washing scheme. A great scheme for sure, but is this advertising council activities in the run up to an election using public money? Put it online perhaps, but printing and sending this to homes across the borough?

The Tories also claim examples of waste such as:

Labour wasting £120,000 on a failed legal bid to save ‘Greenwich Time’, £140,000 on redundancy payments for staff who were then re-employed and countless other examples

In terms of financial mismanagement I’m surprised there’s no mention of the continual vast gaps in the parking budget. It’s been covered on this site a few times and posts have always featured Greenwich council’s own reports showing around a £10 million miss over the past 5-6 years, and still it continues. 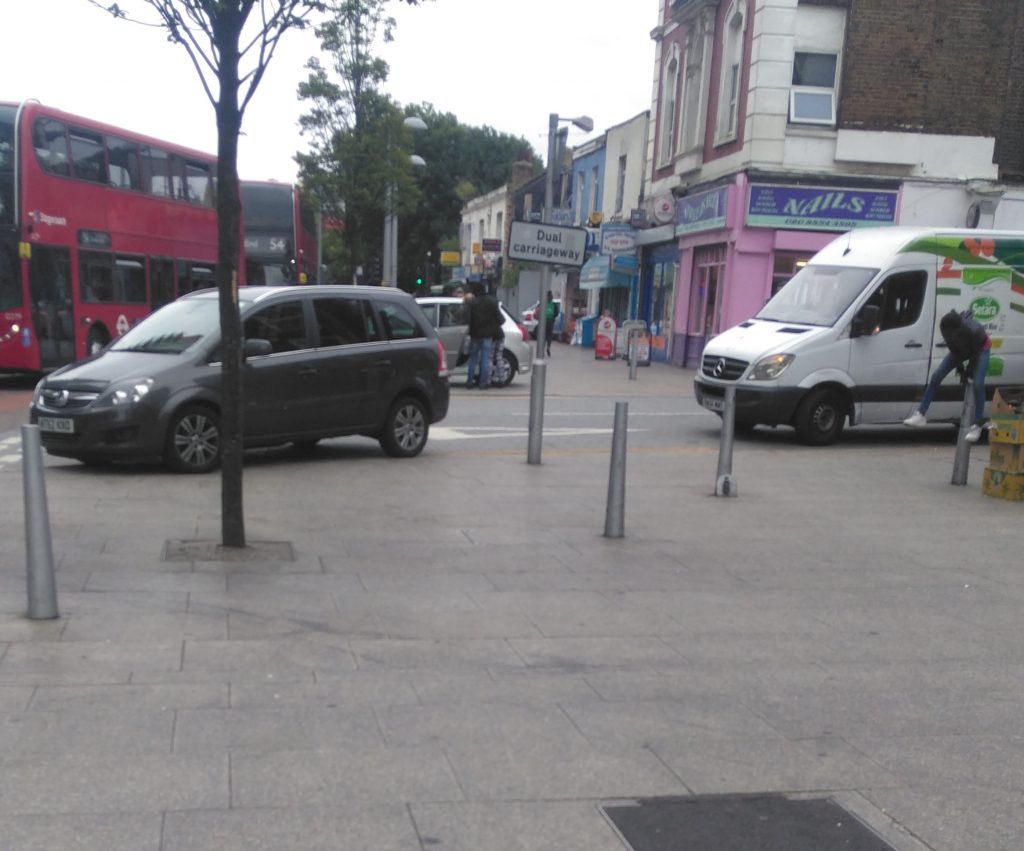 They also want to cut support for staff union relations from council funds. I’ll confess I don’t know the ins and outs of this (any comments on this please leave below) but it seems a way to alienate many potential voters and staff.


They’re on a sticky wicket here again as George Osborne cut £700 million from TfL back in the 2015 budget, and TfL and the mayor have limited scope to raise funds to plug that gap as mentioned earlier. Raising what are already some of the worlds most expensive fares is one such option but hardly a great alternative if a healthy city is desired.

Again, a tourist tax of, say, £1 a night could help but no-can-do if Whitehall blocks it.

The first point listed in the manifesto is a campaign for an express bus from Eltham. Yet this is a policy Labour also support and TfL have little interest in, nor many funds to do so given cuts.

They do mention Southeastern, (unlike Labour which was utterly bizarre) and re-affirm support for devolution to TfL.

Unfortunately it’s Conservative Transport Minister Chris Grayling who blocked it. At least they havn’t invited him down to Eltham this time as they did last year which is one of the surest ways to lose votes.

Like Labour there’s silence on improvements that were expected under a TfL takeover that now look like being blocked, such as all-day staffing to man barriers , protect revenue and increase safety, nor lowering fares to the TfL pay-as-you-go scale and removing the SE London fare premium other parts of London do not pay.

To be honest it’s all very weak. Nothing on better Thames Clipper services (Labour was silent too) nor mention of any other bus issues as cuts are coming.

Yet they find space for the claptrap about Bakerloo coming to Greenwich.

One solid proposal is scrapping the £10 charge to drop off bulky items at dumps in order to reduce fly-tipping.

Current plans for the Cruise Liner terminal, the IKEA development and Labour’s plan to expand the ULEZ road charging zone to the South Circular.

There’s a lot more vague stuff. It’s much like Labours. At least be a bit adventurous and have some interesting ideas!

It starts with this:

The Labour run Council built no council housing during 2016-17 or the first quarter of 2017-18, instead deciding to spend £65million buying homes on the open market, which will push up prices even further. We need more affordable housing locally, not less.

They’re right that spending £65 million buying market homes simply pushes prices up for others, is extremely expensive according to Greenwich’s own figures when compared to alternative options and provides far less new social and affordable housing than partnering with Housing Associations or Meridian Home Start.

Having said that, Greenwich Council are prevented from building many homes outright due to very heavy restrictions imposed by Central Government.

However, how they’ve attempted to by-pass them is the worst possible way to do so. Given that, even if they could build outright would they even do so given the lack of effort with Meridian Home Start?

Who knows, but both at a national level with the Tories and locally with Labour Greenwich is in a mess when it comes to new housing.

They want to expand free schools and academies. On health, little firm is said and given most power lies with central government and Jeremy Hunt, they’re in a tricky position.

They support the adult social care precept added on to council tax:

Much like funding police, moving funding of services to council tax precepts is damaging the poorest more than other forms of taxation.

They are pressing for an extension of council tax support to 100% instead of 90% for poorer residents, but many poorer people are not eligible for the exemption.

This falls into a wider issue with UK politics, whereby little is done to lower living costs across the board but instead a policy is adopted to selectively help some of the poor to cope with costs, yet many poor people are ineligible and so face high costs with little help.

The fundamental issues of high living costs – housing, transport, energy – are not tackled and only some poorer people get help.

Like Labour’s manifesto the document is pretty thin on actual policies. It doesn’t touch on issues like Silvertown Tunnel which could assist the party in areas such as Greenwich.

This Eltham-centric manifesto shows the goal – to hang on rather than expand and challenge in areas they don’t already have a foothold.

In that gap smaller parties such as the Green’s and independent resident party’s have sprung up to provide some opposition. They’ll be covered next.

You can read the manifesto here.

Become a patron of the site: Patreon.com/TheMurkyDepths