Posted by fromthemurkydepths on January 22, 2014 8 Comments 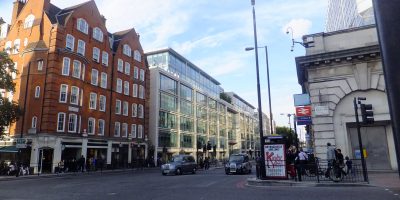 I’ve been delving some more into Greenwich council’s plans for where next years £2.5 million worth of funding from TfL will be spent. As expected, there is scarce mention of making streets attractive through better design. There’s nothing mentioned in terms of rejuvenating grim areas either this year or next. The few mentions of attractive streets is in stark contrast to Lewisham and Bexley, where ‘design’ and ‘public realm’ crop up throughout documents.

Shopping areas and spaces around stations in Lewisham borough such as Sydenham, Ladywell, Deptford and Brockley have all received cash to smarten them up, or will do very soon. In Bexley borough, its the same at Sidcup, Erith and Northumberland Heath. Greenwich priorities are elsewhere – improving grotty areas is not seen as worthwhile. They are seemingly happy with the state of places. Improving streets to entice business and visitors? Improving civic pride and engagement by having area people can be proud of? They think it doesn’t matter. One of the only mentions of streets is this:

“A significant number of our streets have been renewed under the previous 3 year LIP programme. This has included major improvements in parts of Woolwich town centre with the regeneration of the squares and surrounding areas”.

Yet that scheme was mainly funded from money out of a different pot – the Mayor of London and the Greater London Authority’s 100 public squares project. And ‘significant number of streets renewed’? Where are those? Renewed clearly doesn’t mean visual or usability improvements. To Greenwich council it’s often just new tarmac and paint on the road. There’s precious little evidence out there of more than that.

So then, onto some of the various sections of the report.

This must have just been laying new tarmac. Little has been done to make these streets more attractive.

Elsewhere under cycling, one of the most promising sections of the entire report is ‘ We are proposing to introduce ‘light’ segregation where funding for full separation is not available. This will include ‘armadillos’, traffic ‘wands’, splitter islands or similar on identified routes. Locations where this could be trialled are ‘principal cycle routes’ including Rochester Way and the A206 (Woolwich Road/Plumstead Road). Studies are taking place during 2013/14 to inform the detailed 2014/15 programme at present under these areas’.

I previously wrote about how Plumstead Road is a perfect place for a segregated lane, after the bodge job that was carried out 10 years ago at a cost of millions.

Greenwich’s plans for Crossrail related improvements in Abbey Wood are mentioned less in Greenwich’s document than Bexley’s. This despite the station being in Greenwich borough and it being a great chance to regenerate Abbey Wood.

“A range of schemes will also look to support and strengthen access to our new Crossrail stations at Woolwich and Abbey Wood. These include a number of walking and cycling initiatives, the Plumstead Road Major Schemes bid, and a discrete budget each year for Crossrail complimentary measures studies to augment the wider, separate funding opportunities available”.

One of the only times Abbey Wood is mentioned throughout, whether relating to Crossrail or not. Despite pretty much the whole place being in dire need of investment. I don’t think many in the council even knows it is under their control, such is the sense of abandonment.

There is also £230k for controlled parking zones. No mention of where though? Bizarre. Maybe Abbey Wood. Ignore all the crap everywhere and stick in a load of parking metres and signs in their own inimitable way.

A decent chunk of money – £450k – is for local schemes. More guardrails and clutter? That’s usually the case. The safety plan actually has the roads where money will be spent, but nothing on what exactly the money is to go towards. They are Plumstead Common Road, Beresford Street and a section of Shooters Hill Rd. Below are some images of these roads.

Firstly, some pics of Plumstead Common Road. You can tell it’s in Greenwich by the masses of railings lining the road. Unpainted and the cheapest possible. Will any money at all be spent making these look a bit better and removing sections that aren’t needed?

On this road is the Co-op supermarket, which is a fine building. However it’s not so great at street level, with shop frontages not matching the quality of the building above. Plus the expanse of tarmac outside isn’t too attractive. Some money could be used to plant trees here, improve shops fronts and have better lighting. There’s more images of the road below, where improvements can be made:

Next up is Beresford Street, which again can be improved pretty cheaply. Sort out the railings, plant some trees etc:

Then there are the 20mph zones. One is Broadwater Road in Thamesmead. It has newly installed, pointless railings, that impede wheelchairs but do nothing to stop motorbikes which is the reason for their installation.

Along this road Greenwich have randomly put in wooden bollards. Further along the road there are none so these don’t really do anything at all. Also, they’re by double yellow lines so why would people park there anyway? Customary lack of weed removal here too.

Then there’s Begbie Road down for a 20mph zone, which already has speed bumps. not sure why this area is getting money.

Calderwood Street in Woolwich is also in line for the 20mph treatment. It is heavily used by buses. Speed bumps here? Hopefully they won’t make the same mistake they did with the 469 route in Abbey Wood/Plumstead, when Greenwich Council installed bumps that damaged buses, so had to remove re-do them at a cost of thousands.

Calderwood Street is actually one of the best streets in Woolwich so why is it a priority? It’s pleasingly devoid of visual intrusions through excess mess and clutter. It lacks tons of signs and railings. Always had a better feel to it than other areas of Woolwich due to that. It’s also had some relatively recent work. Is this the best place to spend funding?

So where isn’t mentioned at all? Abbey Wood’s four shopping parades get no mention. They are the ‘village’ area around the station, McLeod Road parade, Eynsham Drive area, and Grovebury Road, along with with just about every street in the town which needs improvements. All in dire need, yet no money at all. Look at these pics:

The fencing is way past its sell by date. Ugly, dangerous, with sharp spikes, and this is common place all over Abbey Wood. Illegal parking blocking pedestrians also seen.

More rusty, broken fencing. These fences serve little purpose anyway. This is a place where bollards could be installed instead alongside the curb to stop drivers going onto the grass and parking there. The removal of fences would open up the area. Put in some play equipment too?

The above images are nearby in Abbey Wood. The usual unkempt, neglected look seen so often across Greenwich borough. Despite millions given each and every year to Greenwich council little ever finds its way to improve these areas.

I like the image one below on Eynsham Drive in Abbey Wood, as it shows that when tiny amounts are spent it’s on something that achieves nothing. Here is a newly installed railing that serves no purpose. Typical, pointless expenditure of funding whilst much-needed work is ignored.

Other areas in need that won’t see better streets as ignored in the document are:

Area around Coldharbour library – nothing

Numerous run down estates across the borough – nothing

East Greenwich and area around the library – nothing. It’s pretty grim there.

Removing the railings is such an easy win. This is an area with a library, major bus stops, quite a few shops, and close to a railway station. There’s a reasonably large amount of people walking by each day and it’s left to get like that. Ample funds have been available to sort it and nothing has happened. Just 20k from that £2.5m to cut some down would bring about a big improvement, improving the crossing for pedestrians and cyclists.

The thing is, they would never get away with installing crap, or mass neglect, down the road in Greenwich town centre. There is good paving there, nice lighting, and few railings. On the road in the image below, lights are attached to buildings and strung over the road, so less lighting poles, clutter and pedestrian obstruction. Elsewhere there is attractive street lighting and lamp poles.

If Greenwich council can do it there they can adopt similar principles elsewhere. Perhaps with less of a budget, but then with so many millions each year from various funds standards could still be high. As soon as you pass the Naval College heading east it’s immediate that interest and care towards quality public realm falls away.

There needs to be a shift so that all areas of the borough enjoy improvements, not just the favoured three spots. There also needs to be a culture shift inside the council before improvements are realised, as departments seem to be following the same old path as most of the borough streets and public areas decline. Along with this decline goes the reputation amongst residents and visitors.

Maybe there’s hope. It does say ‘We will be producing a new Streetscape Design Guide over the coming financial year to ensure a standardised and high quality specification for all forthcoming street renewal programmes’.

This is welcome and I hope there is fresh thinking in the council, but why has it taken so long? They are years behind. In the next post I will look at future plans mentioned within the report. Money will be heavily focused upon Woolwich, Eltham and Greenwich. I will also show some examples of public realm improvements that would be great to see across Greenwich.